Your paying off your debts on one side, but incurring new debts of a different nature on the other, takes you nowhere. First plug up the hole, from which water is getting into your boat, and then start the work of removing the already collected waters. First divide your mind two ways .Regarding not incurring additional liabilities; you must be cent per cent active. No more sins, no more vices; no more degenerations.

725.Don't think even of your good acts and merits. That attachment to the meritorious actions of yours , will again entangle you. 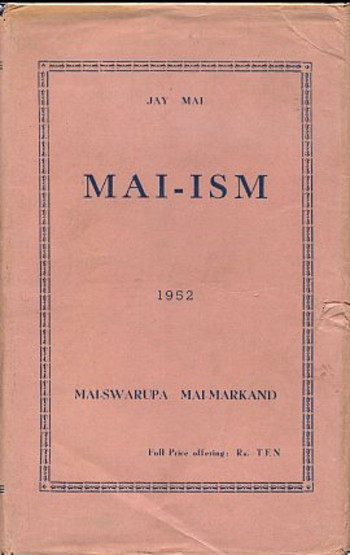 [ Mai-ism was represented at All Faiths' Conference at Nasik (India) in 1933 and the Indian Philosophical Congress at Poona (India) in 1934. Maiji was invited to Japan for the World Religious Congress in 1955. Maiji was the Sub-Councillor-in-Chief of the International Religion Federation which was started in Japan in 1955
.
Maiji had been elected as VICE PRESIDENT and spiritual MINISTER for PEACEFUL HUMAN RELATIONSHIP & Universal Religious Alliance ( U.R.A.) in Havana, Cuba for SIX YEARS FROM 1959 TO 1965.

As stated in the Preliminary Report pertaining to the Congress held on 23 October 1959, the complete attendance at the Congress was around 3800 persons 2184 of which intergrated about  318 different official delegations, which came from 96 different countries. The representation was of  449 different sections and sub-sections of religious and various organisations. Further more , 43 countries had sent their official observers.  Appreciation and truest understanding about Mai-ism by the said World Congress would be evident from these words; " We have received valuable literature from all quarters of the world, which amply reveals that the regeneration of man as at the hand, as well as that a new age ( Aquarian ) is being ushered in taking shape of  a brand new Spiritual Civilisation. We recommend such sources of research. We recommend Mai-ism and the Mai-Institute of Santa Cruz West, Bombay - 54 India." ]