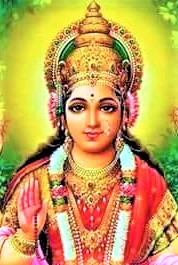 (131) Nish-kalankaa निष्कलंका - Of a faultless career. ललिता सहस्रनाम स्तोत्र, नाम क्रमांक 153
In cases of all lives and careers of different deities and their incarnations, one will find some imperfections, some breaches, some injustices, some follies and so on, but Mother is perfect from every aspect in Her career. Nirvadyaa refers to having no defects, whereas Nishkalankaa refers to doing nothing defectively.

(133) Nish-kaamaa निष्कामा - Without desire. ललिता सहस्रनाम स्तोत्र, नाम क्रमांक 142
For the perfect nothing is missing, which would generate to desire. Applied to the devotee, he has no other desire except being Hers.

(134) Nish-prapanchaa निष्प्रपंचा - Without any desire of accumulation or expansion of worldliness, his outright vision being the negation of illusion, and heart and mind being full of peace and bliss, due to non-duality. ललिता सहस्रनाम स्तोत्र, नाम क्रमांक 146

(135) Nir-antaraa निरंतरा- Who makes no differences. ललिता सहस्रनाम स्तोत्र, नाम क्रमांक  151
It is making differences and distinctions of separateness that is responsible for and the breeding ground for fear and hatred, pride and distrust, etc.

(136) Nir-upaadhih निरूपाधिः - " Pure, untouched by spot." ललिता सहस्रनाम स्तोत्र, नाम क्रमांक 154
" Without the chance of being delimited by contact or juxtaposition, etc."  Up(उप)=near, adhi (अधि)= gives. The red flower which gives its colour to the crystal near it is the upaadhi(उपाधि). The idea here transfers. It is that She has nothing inherent in Herself to blame or point out as a defect but not only that, She is uninfluenced by anything in contact or proximity. Here the very ordinary notion of one pure by himself but getting impure by company, contact or proximity is, as it were, repudiated. Upaadhi उपाधि is also ignorance, as it causes the appearance of, a plurality in consciousness (chit चित). Upaadhi in worldly meaning may be taken to mean self-created troubles, miseries, responsibilities and burdens out of ignorance, delusion and wrong notions and beliefs.
The funniest though most innocent instance of Upaadhi is seen when an honest well behaved man on the path of progress towards realisation is often found retrograding due to the false notion of  "I and mine" in such conclusions as these :- " Who is there to take care of my wife and children, if I do not forego my personal work of exerting myself for my evolution and do not remain constantly busy in earning for them, serving them, protecting them and doing my best, spending my whole life for them ? " The family, the wife, the sons and daughters, smilingly biding him down to a routine life lived for them and their happiness is " UPAADHI".

When devotion becomes extremely ripe, Mother actually twists out such a devotee from his contact with Upaadhi by sometimes almost seemingly merciless adjustments, i.e., by boons in disguise of curses. There are many interesting instances. The sugar black worm would not leave sugar piece, though you blow it out or give strokes. He has to be actually caught and twisted out or pulled out.

Maadhavadass, a very poor devotee would not leave his house for going to saints or holy places, least his family may have to remain hungry because he used to maintain them by daily earning. Once he was actually pulled out by his guru to go  Brindaavan the places of Lord  Krishna. One rich man, the next day, helped the family and on getting great gains in his business, began to believe that it was due to this most deserving charity. He took charge of the family, considering his wife as his real sister, providing them with all comforts undergoing great expenses, as if all were his own children. After a time the young children began to constantly wish that Maadhavadass should not return at all, lest they might have to return from the palace to the beggars' cottage. Maadhavadaas came one night stealthily, knew they were extremely happy, and left the world, never to return.

Sometimes Mother is seemingly merciless. I explain Her name "Paarvati" (पार्वती) " Daughter of the mountain" by this idea of " born out of such hard-hearted stone".  In the case of Mother's devotee, a stage came when he like to pass all his time for Mother. The wife was however too strong for him. The love between both was of an extremely strong intensity, but the wife's love was of exclusive possession. She would love him like a god, but would not leave him for anything and anyone. Husband's love was of the type explained above. " What shall become of her if I do not make her happy ". A deadlock, a mountain of barrier stood in the path of the devotee's progress. A most miraculous wave came. The wife began to hate the husband most bitterly, would not tolerate even the shadow of the husband, so to say turn him out to live separate. An Inexplicable Miracle. The woman who would die for her husband was changed to be to be unable to bear the sight, presence of her husband or even, to bear anything about her husband.

A devotional king had a most wicked wife. She would constantly quarrel creating quarrels would not allow the king to enjoy himself with his relations, friends, or subjects, would not share his happiness nor allow him own way. The subjects and ministers and relations were damned tired of her and pitied the king whom they most loved. After great efforts, they succeeded in giving a big estate to the queen and tempted her away to live away and separate. The king was married to a most virtuous husband worshipping, educated and accomplished princess. All was joy and happiness. The new queen kept the king constantly happy with all sorts of pleasures, programmes, parties etc. A year passed, the second marriage date reappeared. All went to congratulate the king. The king was weeping most bitterly. On inquiry, he solicitously said, " Bring my old queen back. I have not remembered Mother even once, throughout the whole year."
Mother's Lodge Ideal says humorously, " If no Guru can cure you Mother will turn your wife or beloved to be your best Guru."

Mother's path is a mystery of mysteries on account of such miraculous drastic measures as none can understand. Once you become Hers, She has Her own ways, Her own arrangements and adjustments. Once you enroll yourself as Her's, the remaining task is Hers.

(140) Nir-ishvaraa निरीश्वरा - Without a superior. She about whom, even atheists are constantly busy thinking.ललिता सहस्रनाम स्तोत्र, नाम क्रमांक 155
She belongs to both theism and atheism. She about whom thinkers are busy thinking, in spite of their saying that " God does not exist."